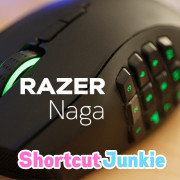 Hey guys, so i’ve been asked what kind of input device i use for working with Cinema 4D. and well here it is. Its the Razer Naga 2014 edition. I’ve been using this one for just over a year, and had the previous version of this for about 3 years, before the right click stopped holding. So im a pretty big fan of these mice. This one as you can see has sustained some damange on the buttons, but i only noticed it now when i started taking photos 🙂 just some of the paint coming off, i guess because of all my body oils and sweat, from all the hard work i do =)

Originally the 12 buttons on the side where intended for gamers so they can cast spells, or whatever they do, but i find them just as handy in every day work.

for example i have the tilt of the Scroll wheel set to copy and paste, ) it can tilt right and left as well as scroll and middle click.

Then i have the top row set to Num Enter ( comes in handy in many places, but the Num one is used because in photoshop it lets you drop a transform quicker), left, right arrow keys  for browsing through image galleries

Row after that is mouse button, 4,5 ( the regular back forward commands, rectangular selection in c4d, v key radial menu). 8 key is bound to F9, so i can set keyframes quickly.

Then the row at the bottom, so the Numbers 1,4,7 are mapped to F8 to play timeline in c4d ( with ctrl it does a render region), F6 top open picture viewer with ctrl.

The rest get mapped as i need them Sometimes i find myself pressing the same thing a lot. so i map that button/or command to one of the other buttons. Its pretty organic.

Really important feature, especially if you are working on multiple screens, or just a really big monitor. what it does basically is this: the slower you move your mouse the less it moves. But the faster you move it, the father it goes. So that way, if you need to click something small, you move your mouse slowly and its very accurate, and when you need to access something on the other side of the screen, you don’t need to do the awkward lift and move thing, you just flick it between your fingers. My settings for the Razer Naga 2014

Hope this was helpful, if you have any questions shoot.